As a budding writer (get that, "budding", I've published my first book so I'm no longer "aspiring") I would spend many hours sitting at my computer writing background material, my novel, then editing my novel, changing my background material, editing my novel again and so on. It's tiring, exhausting actually, and it doesn't exactly endear you to writing as a thing to occupy your time but what other options are there? It turns out there is at least one and it's known as "sprinting". I am a member of several writing groups on Facebook and I had seen the idea of "sprints" mentioned several times, so I was curious. What exactly were they? Is anyone out there thinking, "Sprinting? Isn't that what runners do?" Yes, it is, but it turns out that's not the only meaning. The online dictionary service, dictionary.com defines "sprint" as:

verb (used without object) 1. to race or move at full speed, especially for a short distance, as in running, rowing, etc. verb (used with object) 2. to traverse in sprinting: to sprint a half mile. noun 3. a short race at full speed. 4. a burst of speed at any point during a long race, as near the finish line. 5. a brief spell of great activity. 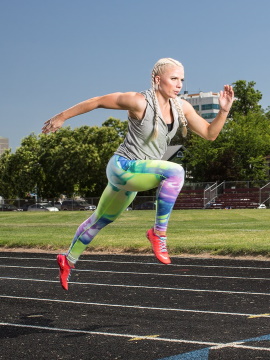 Until a week ago I had only a vague idea of what a sprint was but, having recently done a couple, it becomes clear (to me, at least) that it is that last definition that seems most relevant to this discussion. In terms of writing, a "sprint" is simply a period of concentration with the aim of achieving something, namely writing something. Another definition of a sprint, is the "sprint to the finish line". This second idea is to take a project you are working on, identify all the problems/loose ends and spend an amount of time (say two weeks) working on them in order to push you across the finish line. This isn't the kind of sprint I favour or that this article is really discussing but I include it for completeness. You can sprint solo and many writers do but there is something more interesting about doing it along with others. Every week I go to a local pub with my friend and co-author, Ben, where we write until about two o'clock after which we relax, have some food and a couple of beers (HINT: beer and writing do not go together well). Though, for the most part, I do write there are times when I don't feel so motivated and, when that happens, I might sit for a while and look up some stuff, surf the net, maybe even go on Facebook. Yet I already know that I often do better on these days with my friend; I may not always write a lot but I do tend to write more than I otherwise would. In addition, my friend and I have gone to local writing meets where everyone just writes and, on those occasions, I have found myself writing quite a lot even though it can cover several hours and I can find myself flagging after a while. So, on Facebook I decided to ask the question: "A question on sprints ... what exactly are they? I mean, are they simply a period of time you spend 'just writing' or is there some other thing involved?" The answers I got back were fairly straightforward:

"Exactly what they mean - sit and write as fast as you can." "In this group we tend to do twenty-minute sprints. So, write for twenty then have a break and then go again." "Sprints are also some of the best fun you can have whilst getting RSI."

I discussed it with Ben and we agreed that the next time we met to write we would have a go. He suggested he might write a description of how a car engine worked so I looked up a few ideas to do something similar ... I failed, however, between us we came up with the idea of writing descriptions of things related to our own fictional universes (both of our first books being science fiction oriented). Ben penned a conversation between his main character and an engineer, a discussion of the "S-Drive" the fictional technology he had developed to allow his ships to travel at speeds greater than that of light. I chose to write a discussion between one of my main characters and another explaining how the fighting suits they wore in battle worked and were developed. We both did well, with me writing just over eight hundred words and Ben writing around twelve hundred. Our next sprint, again related to our fiction, were news reports concerning events that had already occurred in their respective universes. I chose to write about the death of a failed assassin who had "fallen" from a very high building; a conversation between a reporter and the chief investigating officer. Ben chose to write a discussion between a journalist and a less-than-media-savvy Admiral following a space battle, including the actual news report as published. Again, both of us did well at eight hundred and sixty and nearly a thousand words respectively. Having done two sprints we both decided to write what we wanted to, with me starting a new story (working title, "The Ghost"), one that I hope will become a novel, and achieving some eleven hundred words which is currently running at a little over five thousand. So, that's sprinting in very general terms. There are other things to consider, some of which I touch on above, such as: Another idea might be to use a timer, again because it can act as a motivational concept simply knowing that you only have a specific amount of time left. It seems to me that a timer that effectively disappears then puts up messages like "10 minutes remaining" might be quite motivational. A final idea, perhaps somewhat divergent from the subject under discussion would be that a tool that allows a writer to type but prevents them going backwards (so no distracting corrections or edits) word be a good idea and might benefit us inasmuch as we might be more inclined to get it right in the first place. In conclusion, my experience with sprinting has led me towards a couple of tentative conclusions. Firstly, that I think sprinting is a good way to start my writing day off and makes me more productive when I switch back to "normal" writing later. Secondly, that real writing (as opposed to editing or similar) is far more interesting especially when one schedules "an offsite" writing day.
Thanks for reading. James C. Rocks, Author ("The Abyssal Void" Trilogy)

It took me fifteen years to discover I had no talent for writing, but I couldn't give it up because by that time I was too famous.